Closing date for the receipt of applications is: Wednesday 23rd November at 5pm.

Candidates will be short listed based on information supplied in their Application Form and covering letter.

Please send a copy of your completed application form, together with a covering letter to: chairperson@carlowccc.ie

Interviews will be held on Tuesday 6th December 2022 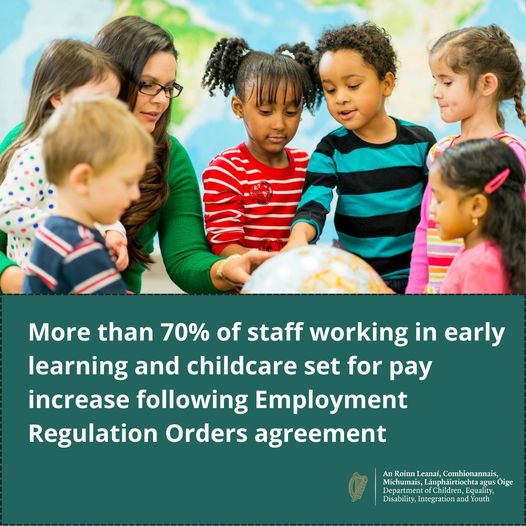 Damien English T.D., Minister of State for Business, Employment and Retail has today accepted proposals for Employment Regulation Orders for the Early Years Services Sector. The Orders will commence on 15 September 2022, providing new minimum hourly rates of pay for various roles in the Early Years Services Sector as follows:
• €13.00 for Early Years Educators/ School-Age Childcare practitioners;
• €14.00 for Early Years Lead Educators / School-Age Childcare co-ordinators;
• €15.50 Graduate Early Years Lead Educators / School-Age Childcare co-ordinators
• €15.70 for Deputy Managers;
• €16.50 for Managers; and
• €17.25 for Graduate Managers.
The Orders are being supported by Government’s €221m Core Funding Scheme, announced by Roderic O’Gorman, T.D., Minister for Children, Equality, Disability, Integration and Youth as part of Budget 2022, which will see increases in funding to early learning and childcare services to support improvements in staff wages, alongside a commitment to freeze parental fees. The commencement date for the Orders – 15 September – coincides with the official launch of Core Funding.
Minister O’Gorman has welcomed Minister English’s acceptance of the Early Years Services Employment Regulation Orders as they will deliver improved pay and conditions for the large majority of those working in the sector, will support career pathways, and will ensure improved minimum rates of pay for all those considering entering the Sector.
Minister O’Gorman said:
“I have always said that I believe early years educators and school-age childcare practitioners need their pay and conditions to reflect the importance of the work they do. Today’s announcement is an historic first step towards that”.
“Since I became Minister with responsibility for early learning and childcare, I have been focused on reducing costs for parents, improving sustainability for providers and importantly improving quality for children”.
“Yet low pay and conditions as well as limited opportunities for progression has made it difficult to attract and retain staff in the sector – and it is the staff who are key to the quality of children’s experiences”.
“Through these first Employment Regulation Orders for the sector, I hope that early years educators and school-age childcare practitioners can now see a real future for themselves in a job that gives so much to children, their families and to society more broadly”.
“I would like to acknowledge the independent nature of the Labour Court and Joint Labour Committee process and the hard work of its members in negotiating the pay and conditions for employees in the early learning and childcare sector”.
The Employment Regulation Orders apply to approximately 27,000 staff.
It is estimated that 73% of those working in the sector will see their wages rise as a result of the Employment Regulation Orders with the wages of 50% of employees in the sector expected to rise by 10% or more, and the wages of 20% of employees are expected to rise by 20% or more.
https://carlowccc.ie/wp-content/uploads/2018/10/ccc4.jpg 0 0 Carlow Childcare Committee https://carlowccc.ie/wp-content/uploads/2018/10/ccc4.jpg Carlow Childcare Committee2022-09-07 09:59:382022-09-07 09:59:38DCEDIY Update on Employment Regulation Orders for the Early Years Services Sector 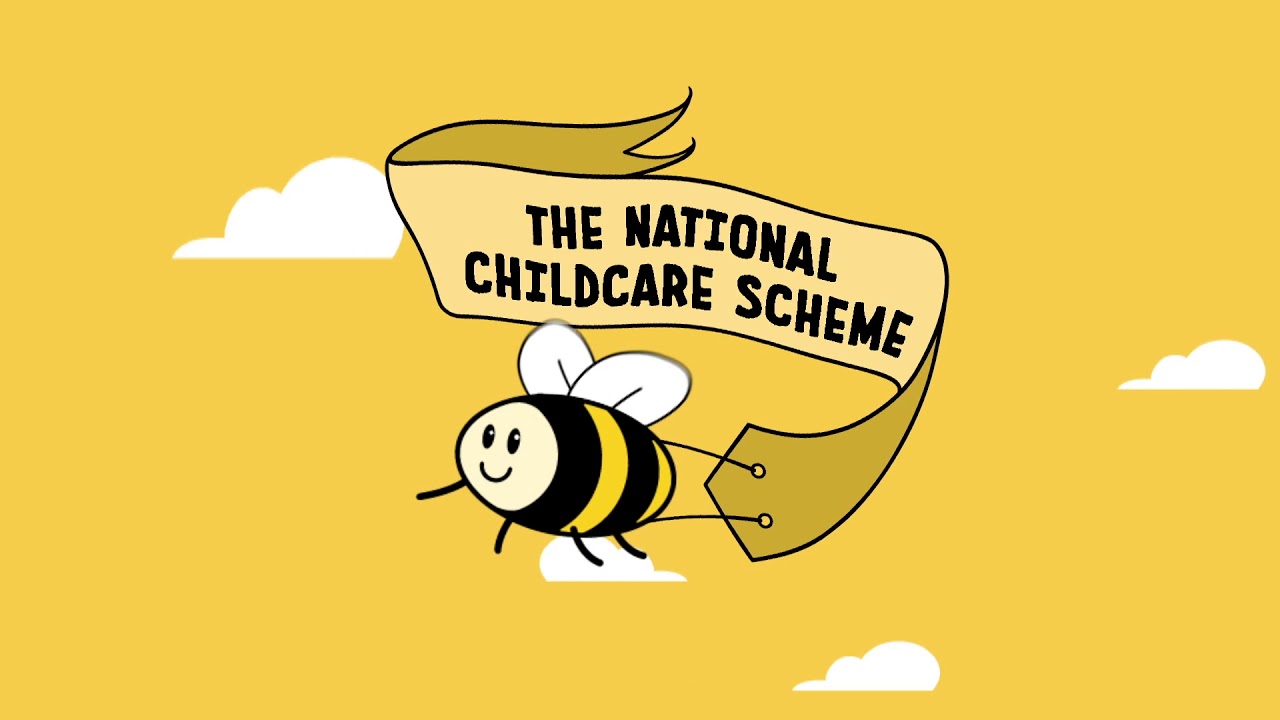 The Green Energy Strand/Strand A will support the Climate Action Agenda and the Programme for Government, which aim to transition to a carbon neutral economy by the end of 2050 and to reduce greenhouse gas emissions by 51% by 2030.

Under the Green Energy strand, grants will be provided for improvements to increase energy efficiency, utilising renewables where feasible, such as the installation of solar panels and heat pumps, insulation and water conservation measures.

The Retrofit Strand/Strand B will provide grants to existing services in need of upgrading. Eligible works include kitchen works and refurbishment, upgrading of sanitary facilities for children and adults, roof repairs/replacement, and upgrading of flooring.

Applications from eligible services will be accepted in Q4 2022 and successful applicants will be notified in early 2023.

Early Learning and Care Services and School Age Childcare Services who are who are in contract for NCS or ECCE 2022/2023 with at least one child registered are eligible to apply. Successful applicants must be in contract with Core Funding before any funding is released

“The Building Blocks – Improvement Grant will provide funding of up to €75,000 for upgrading, renovating or refurbishing Early Learning and Childcare settings to improve the quality of learning environments for children as well as energy efficiency of the settings.

“Services that sign up for the new €221m Core Funding Scheme are eligible for funding under for the Building Blocks Capital Programme.

“As well as being a substantial support to the sector in itself, it is my intention that Core Funding will unlock access to a wider package of supports and resources to providers who chose to work in partnership with the State to deliver Early Learning and Childcare for the public good. The Building Blocks Capital Programme will be just one of an additional incentives on offer”.

Notes to the Editor:

Eligible works under the Green Energy Strand include:

Eligible works under the Retrofit Strand/Strand B include the upgrade of electrical, plumbing, gas and heating systems to ensure they meet regulations and standards. Costs associated with installation, replacement and upgrade of areas that form an integral part of the building e.g.: 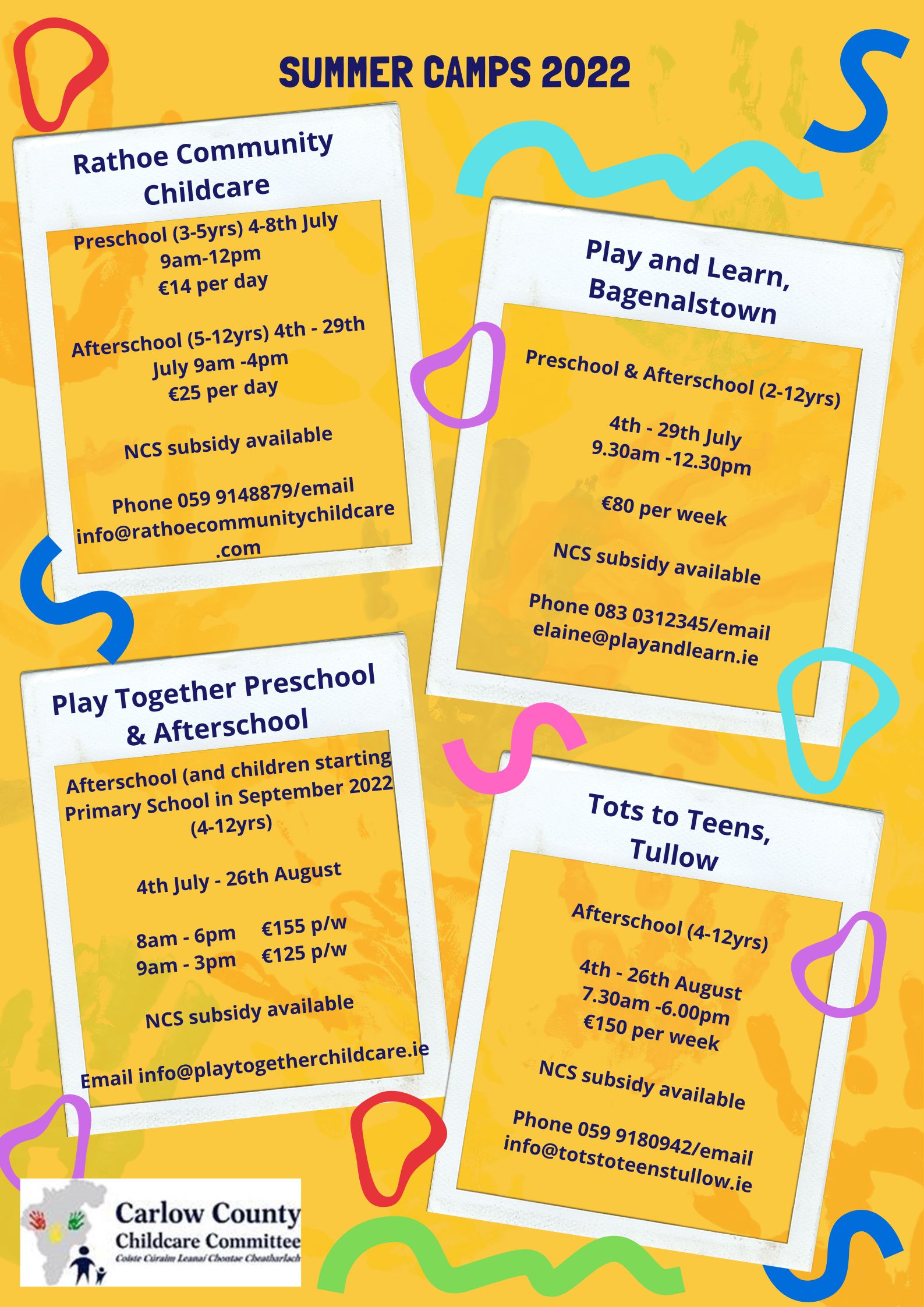 Additional capitation, provided through the Access and Inclusion Model (AIM) to enable a lower adult-child ratio, is expected to increase by 14% from September 2022, rising from €210 per week to €240 per week. AIM provides a range of both targeted and universal supports, to enable children with disabilities to participate meaningfully in the ECCE programme.

The increase in capitation will enable a continued alignment between AIM funding and wider funding for the ECCE programme, which will supplemented by a new funding scheme – Core Funding – also from September 2022.

“Every child should have access to high quality early learning and care. Through the award-winning Access and Inclusion Model, we can support children with disabilities in accessing mainstream pre-schools and help pre-schools recruit and retain qualified staff to support inclusion. This increase in funding is a clear sign of my department’s commitment to continue fostering an inclusive culture, one where all children are supported in benefitting from early learning and care.”

The additional capitation will be paid to ECCE providers approved for AIM additional assistance support from September 2022, coinciding with the introduction of Core Funding.

For more information on the Access and Inclusion Model (AIM), go to www.aim.gov.ie.

With a total budget of €250,000, the Childminder Development Grant provides up to €1,000 to assist childminders who are providing a childminding service in their own homes.

The Grant aims to support the enhancement of quality and safety in the service through the purchase of small capital items, equipment, toys or minor adaptation costs. It may also give financial assistance to new or prospective childminders with their initial set-up costs.

“In April 2021, I published the National Action Plan for Childminding 2021-2028, an ambitious plan that sets out an incremental supportive pathway to bring childminders within the scope of State-funded supports and regulation. The plan makes provision for bespoke training, regulations and supports that will accelerate access to the National Childcare Scheme for more childminders. Access to the National Childcare Scheme will provide childminders with the opportunity to support parents and families with the fees and will continue to support quality affordable early learning and childcare in a home-based setting.

“I am delighted to announce the 2022 Childminder Development Grant for childminders, who provide such a vital service for children and families. This Grant helps childminders make small changes that can have extensive benefits. Throughout the lifetime of the National Action Plan for Childminding, I will provide a range of additional supports to childminders commencing with bespoke training opportunities becoming available to childminders in early 2023.”

For further information about the Childminder Development Grant or the National Action Plan for Childminding, visit gov.ie/childminding or contact your local City or County Childcare Committee. 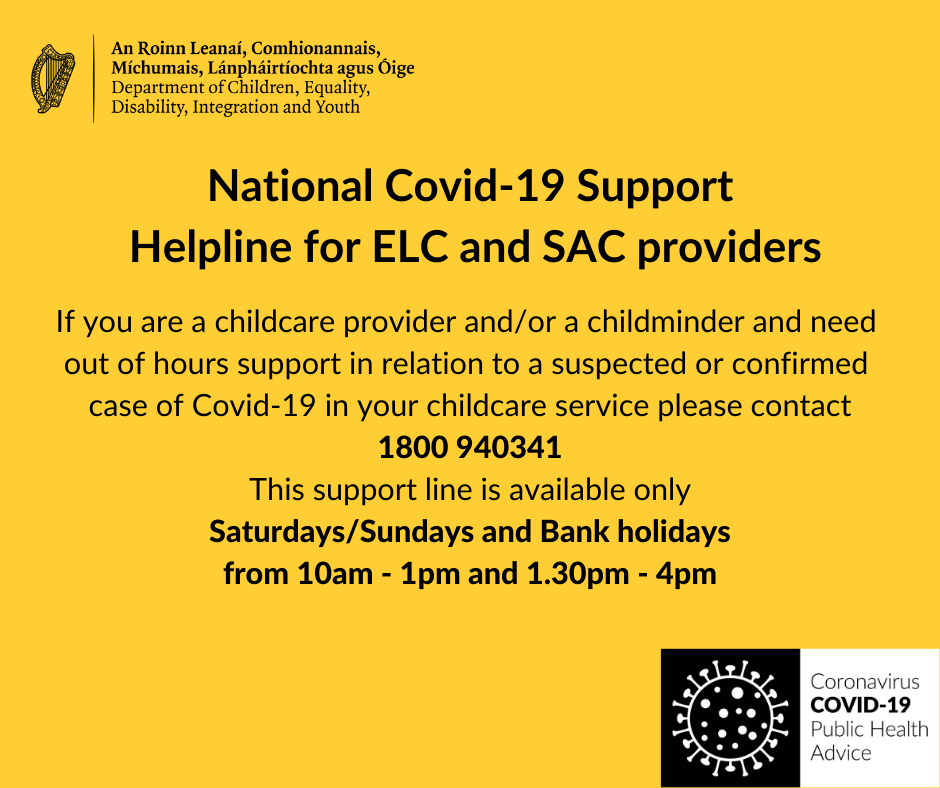 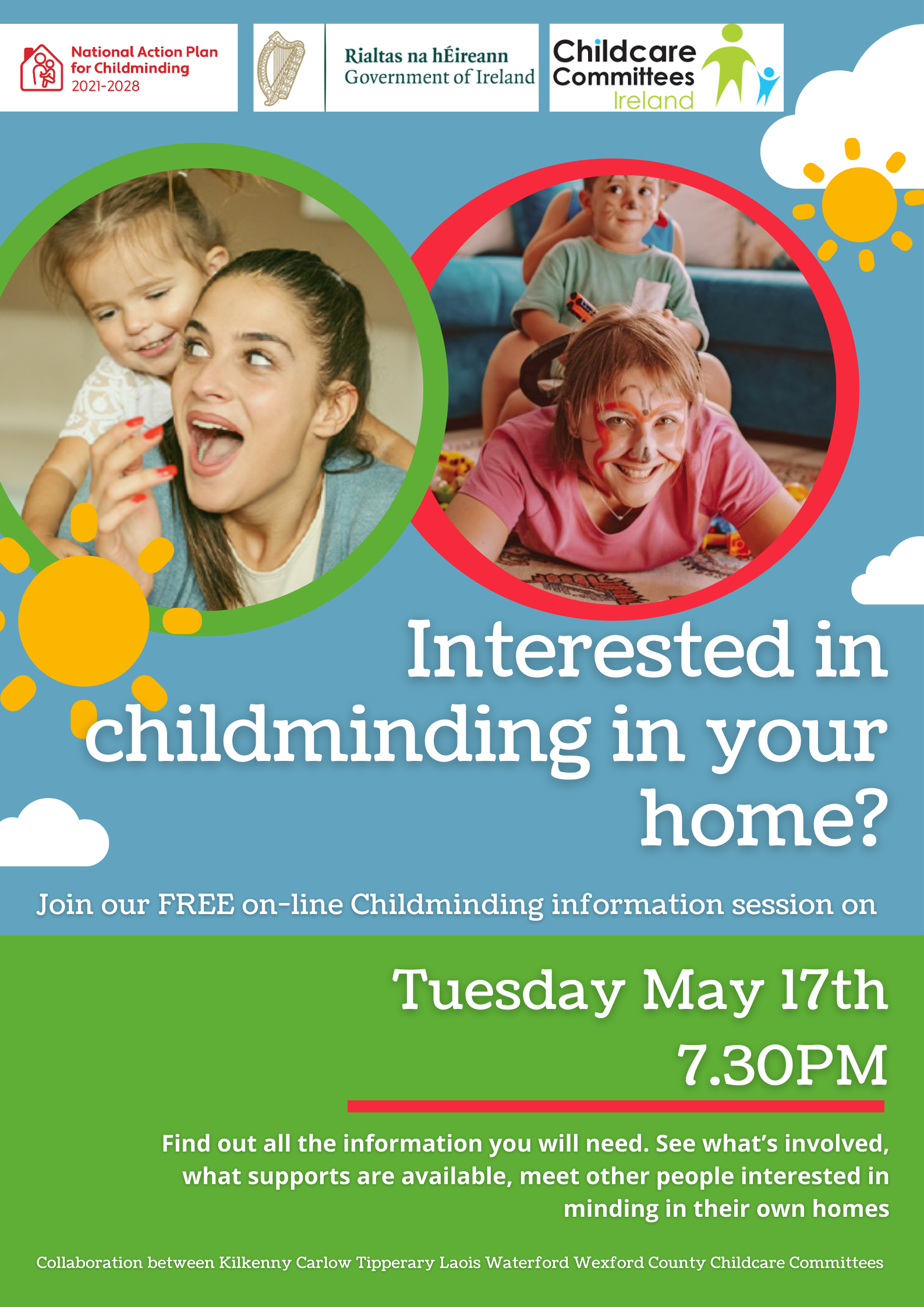